I love Shepard’s Pie.  It is one of those items that I look for on menus and that I am liable to try at any restaurant just to see what type of spin they put on it. For a while, my favorite was from a local restaurant here in East Tennessee called McLaren’s (sadly closed now). They topped theirs with a piece of Provolone cheese… hungry just thinking about it.

Shepard’s Pie, also known as Cottage Pie (I will get to this in a minute), is a simple savory dish with meat and vegetables covered with a thick layer of mashed potatoes.  The name for these dishes started in the 18th and 19th centuries.  Shepard’s Pie, traditionally refers to the dish made with lamb, while Cottage Pie is the same dish mad with minced beef.  The name is used interchangeably now and most of the time, regardless of the type of meat used, the dish is called Shepard’s Pie.  Basically you are looking at a thick beef or lamb stew, covered with mashed potatoes and baked in the oven until the potatoes are a golden brown.  I don’t know that I can know finish this article, I may have to go get Shepard’s Pie – now.

You will find Shepard’s Pie at quite a number of faires.  Usually near the breadbowls or even in the same booth as the bread bowls, the Shepard’s Pie is another one of those food items that lets you have your entire meal in the same bowl.  Easy to eat and easy to carry with you.  Especially if you have picked a colder day to go to the faire, a good Shepard’s pie is guaranteed to warm you up.  Want to learn to make it yourself, try the recipe below, courtesy of Alice the Cook: 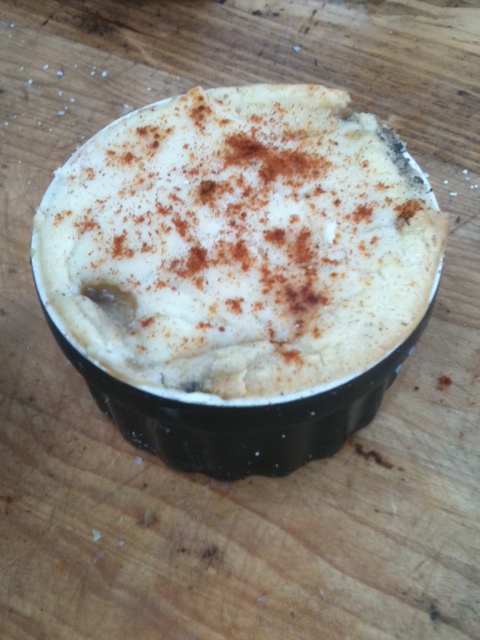 Boil potatoes in salted water until tender, about 12 minutes. Drain potatoes and pour them into a bowl. Combine sour cream, egg yolk and cream. Add the cream mixture into potatoes and mash until potatoes are almost smooth.

While potatoes boil, preheat a large skillet over medium high heat. Add oil to hot pan with beef or lamb. Season meat with salt and pepper. Brown and crumble meat for 3 or 4 minutes. If you are using lamb and the pan is fatty, spoon away some of the drippings.

Preheat broiler to high. Fill a small rectangular casserole with meat and vegetable mixture. Spoon potatoes over meat evenly. Top potatoes with paprika and broil 6 to 8 inches from the heat until potatoes are evenly browned. Top casserole dish with chopped parsley and serve.